Many recent TOS novels have included elements of the wider Lit-verse, and several older novels have been repeatedly referenced.

In addition there are the novels that comprised the "Original Lit-verse" of the s. This was a group of stories which were eventually linked together through references and shared characters. Of particular importance to the later Lit-verse are the Rihannsu series and The Final Reflection , many elements of which have been more or less incorporated into the modern continuity, though undoubtedly requiring a certain amount of retcons.

The earliest book eventually connected to the "Original Lit-verse" was published in The continuity was severely cut back around ten years later under the direction of Gene Roddenberry and Richard Arnold. A few references snuck through in the years following Roddenberry's death, up until the advent of the modern Lit-verse. Closely connected to these books were the DC Comics series of the s.

Characters where sometimes shared between the two series. Several "Original Lit-verse" novels have been referenced in the modern continuity, more or less linking both bodies of work.


The numbering system of the "Original Lit-verse" included here is strictly chronological and did not originate from the authors' or editors' intent. These form a seperate continuity which has been linked to the Lit-verse by several references, but which doesn't completely fall within the same continuity.

A few other IDW comics have referenced the Byrne-verse. In addition to the references noted below, several additional novels, short stories, comics, and audiobooks are connected due to recurring characters and various references in other books, or to other books. Other novels are connected by the six crossover series Invasion! Also included are the stories from Constellations one story of which is referenced in TNG: Before Dishonor , and Mere Anarchy which references several stories.

The B-movie campiness and general silliness of the episode really made it stand out. However, I felt that the character of Captain Wainwright was very flat and one-note: a military man who only sees threats wherever he looks and automatically resorts to threats of torture in order to gain information.

Ward attempted to cram too much information into its pages. The book is certainly dense with plot and can seem confusing at times with all of the jumping around in time. 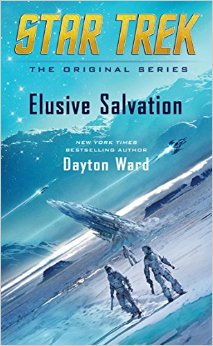 The only part where I kind of lost the thread of the story was towards the end, but the author included a pretty cool reveal that made everything make sense again. For the most part, I enjoyed the complexity of the story, but I see where some people may not appreciate it as much.

Is it too hopeful to want a follow-up to this novel by Dayton Ward himself? Personally, I would love to see more novels following the exploits of Wainwright, Carlson, and Majestic Share on Facebook. Latest Updates.